On the path to alchemical gold

“Mystical Treasures” is a thousand year path through an artistic reworking of those traditions that tried to integrate matter and spirit in order to better understand the human being and his role inside the universe. All these spiritual traditions elaborated in Magnani’s artworks, such as Taoism, Alchemy, the Greek mythology, and Christianity are all aiming to purification and elevation of the human being through a path taking its origin in the raw material until the achievement of purity and perfection: the Alchemical Gold. 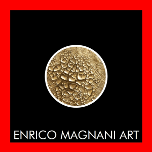