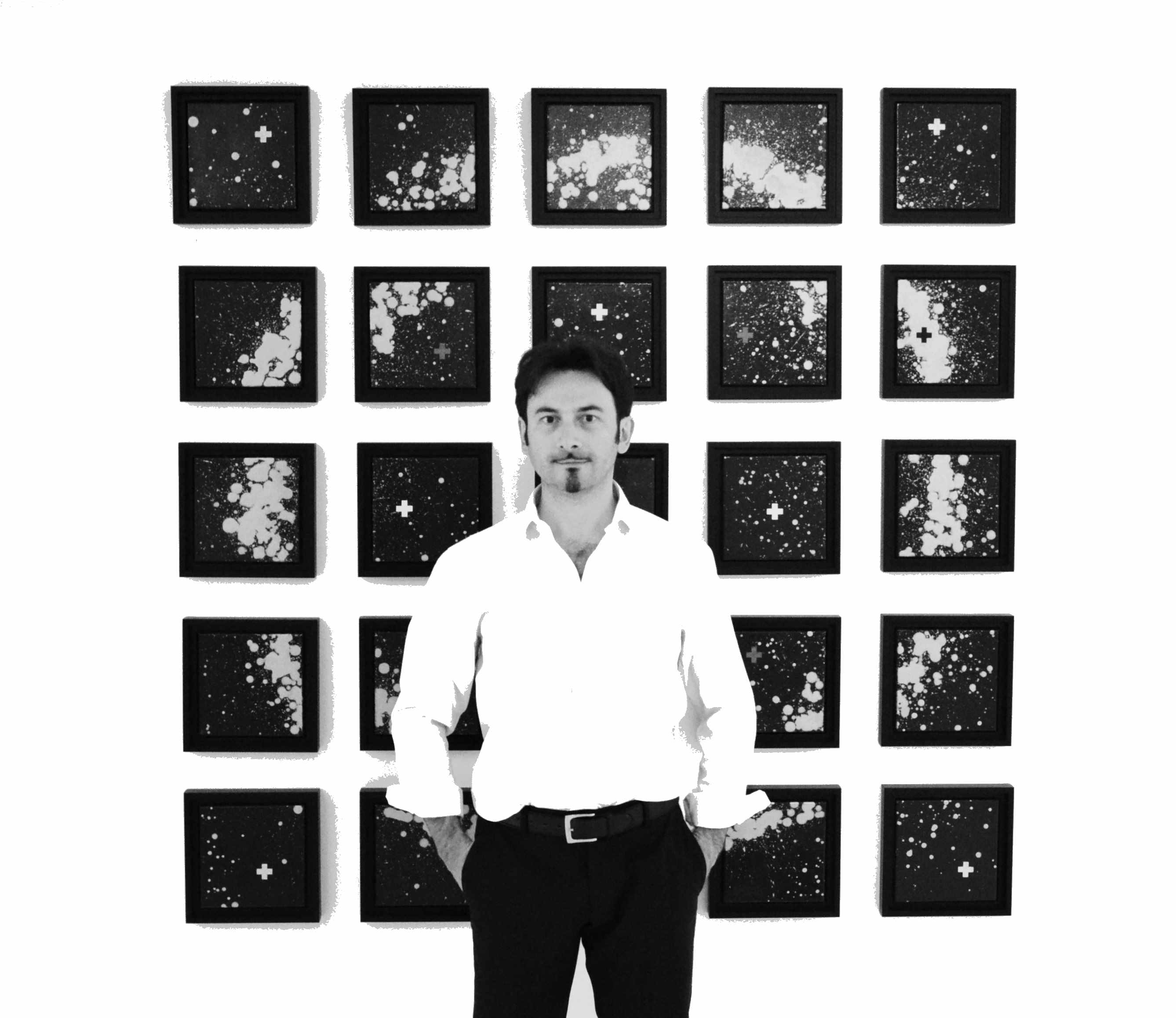 Enrico Magnani is an Italian contemporary artist known for his works that integrate art, science and spirituality. His definitive establishment in the world of art follows an eclectic path which he started out as scientific researcher in the field of nuclear fusion. At a certain point in his career, Magnani felt the need to proceed along those paths of knowledge where purely rational speculation is not enough. After an initial figurative period, his original abstract works quickly brought him to international attention and since 2010 they have been presented in museums, foundations, private galleries and public institutions in Europe and the USA. He holds seminars and workshops on creativity in art and in life through the constructive use of error and intuition.

After his first figurative period in which he painted bodies and faces only with the explicit intent to "amplify to shock", represented by the galleries in Milan and Nice (1997-2003) and in some collective exhibitions in Venice, Innsbruck, and Palmi, Magnani enters in a transition period that can be defined as “a blackout of meaning”, namely a lack of faith in the message of his artworks that made him lose the momentum for public exhibitions, but not the desire to seek and to paint.

Magnanileft Milan for Paris (2004-2006), where he continued to work on the human figure which is transformed, becoming more clean and symbolic. Only in Germany, Karlsruhe (2006-2011), did he definitively attain abstract painting, material and symbolic, with a higher message and, this time, "worthy of being conveyed".

In 2010, in Germany, supported by Director Robert Walter, he presented his abstract creations for the first time at the Fondation Centre Culturel Franco-Allemand in Karlsruhe. In the same year, in Turin, he won the “Internazionale Italia Arte” and began a long-lasting and fruitful collaboration with the MIIT Museum and its director Guido Folco. In subsequent years, under the curatorship of Guido Folco, his work was exhibited in important group exhibitions in various European capitals (Prague, Sofia, Copenhagen, Vienna, Cologne, Berlin, London, and Rome) alongside great names of the Italian art scene including Modigliani, Dova, Funi, Treccani, Boetti, Annigoni, Schifano, Scanavino, and Guttuso. In 2010 his book "Interview with Myself" was published; in the book Magnani explains the choice that led him to abandon the world of scientific research to devote himself entirely to art, the abandonment of figurative painting, and the newly found message which aims to communicate with his abstract works.

In 2011, he exhibited for the first time in the United States in a group exhibition at the 33 Contemporary Gallery in the Zhou Brothers Art Center of Chicago starting a still ongoing collaboration. In 2011 he also participated in the exhibition "Contemporary Italian Art" held at the Italian Cultural Institute of in Copenhagen and “L’unità dell’Arte, l’arte dell’Unità”, in Rome, at Complesso dei Dioscuri Quirinale (Italian President Palace).

In 2012, he realized a solo exhibition at the Altes Dampfbad of Baden-Baden (Germany) and two group exhibitions in the Italian Cultural Institute of Sofia and Cologne. In the same year he began a collaboration with the Akbaraly Foundation with the charity exhibition "Imagine" held at the AEM Foundation in Milan.

In 2013, he made two important solo exhibitions: "Mystical Treasures" at the Italian Cultural Institute of Stuttgart and "Harmonices Mundi" at the Italian Cultural Institute of Prague; the latter inspired by the mystical themes of Johannes Kepler and especially creating a work dedicated and donated to the city of Prague in the presence of the mayor and the Italian diplomatic corps. Also in 2013, to remember his participation in the collective exhibition "Ad Aeternum" at the Palazzo Pontificio Maffei Marescotti in Vatican City.

In December 2014, the MIIT, Museo Internazionale Italia Arte of Turin, realized a retrospective entitled "Mystical Treasures - Works 2007-2014" accompanied by a catalogue that collected for the first time the works of his abstract period. Again in 2014, in Vienna, at the Italian Cultural Institute, in the collective exhibition "Sentieri di Pensieri", Magnani exhibited for the first time a wearable artwork worn which was then published by the national daily newspaper La Stampa.

In 2015, one of his works was part of the exhibition "From Picasso to contemporary artists" at the Oud Sint-Jan Museum in Bruges, Belgium. In October of the same year, he displayed his art project "Cosmic Hug - Connecting art and people together" at the Pinacoteca Ambrosiana in Milan with an event in favour of the Akbaraly Foundation presented by Alessandro Cecchi Paone and followed by Vogue Italia.

His keenness for Charity projects has brought him to support associations like the Akbaraly Foundation (Madagascar), United Charity (Germany) and Ring14 (Italy).

In April 2016, following the invitation of the director Giovanni Sciola, he came back to the Italian Cultural Institute of Prague with the "Magnum Opus" exhibition held on the occasion of the international academic conference "Greed of the Unknown". In May of 2016 in Chicago, at the Zhou Brothers Art Center, he created the collection "Universal Flag" displayed in the homonymous exhibition, curated by Sergio Gomez, at the ACS Gallery. In November of the same year the documentary film "Enrico Magnani - Mystical Treasures" was made and broadcast on national channels on January 10, 2017.

In February of 2017, with "The Gold of the Earth", exhibition curated by Prof. Massimo Mussini at the Cloisters of San Domenico in Reggio Emilia, Magnani displayed more than a hundred artworks covering the last ten years of his abstract work. In September of the same year, following the invitation of the director of the Italian Cultural Institute of Chicago, Alberta Lai, presents his solo exhibition "Supernova - Birth to Life", beginning a new series of works totally different from everything done in the previous years.

In February 2018, with the exhibition "Supernova - Figurazioni Cosmiche", curated by Francesca Barbi Marinetti and Simona Cigliana, Enrico Magnani shows in Rome, at Sala del Cenacolo of the Italian Chamber of Deputies, the Supernova collection exhibited the previous year in the United States. In July, he takes part in the exhibition curated by Guido Folco “Maestri Reali (Royal Masters)” held at the National Library of  Turin. In October, a selection of the Supernova series is exhibited, again in the capital, at the Galleria D.d'Arte on the occasion of the Rome Art Week. The same year Magnani begins the new series “Supernova - Dark Matter” working with phosphorescent pigments to highlight more and more the connection between Art and Science.

In July 2019, Magnani brings his new collection "Supernova Dark Matter" to CERN (European Organization for Nuclear Research) in Geneva with the exhibition "Searching the Unknown" curated by Marilena Streit-Bianchi, the Art & Science project includes the publication of a catalogue that, in addition to artworks, collects texts by renown exponents of various disciplines from art to physics and cosmology. In September the exhibition is brought to L'Aquila at GSSI (Gran Sasso Science Institute) on the occasion of the National Congress of the Italian Physical Society (SIF) and the European Researchers' Night.

In 2020 Magnani creates "Quintessence" a complex work, in permanent exhibition, that develops over five walls at the Gran Sasso National Laboratories, L'Aquila, to represent astroparticle physics through the language of art, with the purpose of making the world of art and science dialogue. The work will be documented through a catalog promoted by the National Institute of Nuclear Physics.